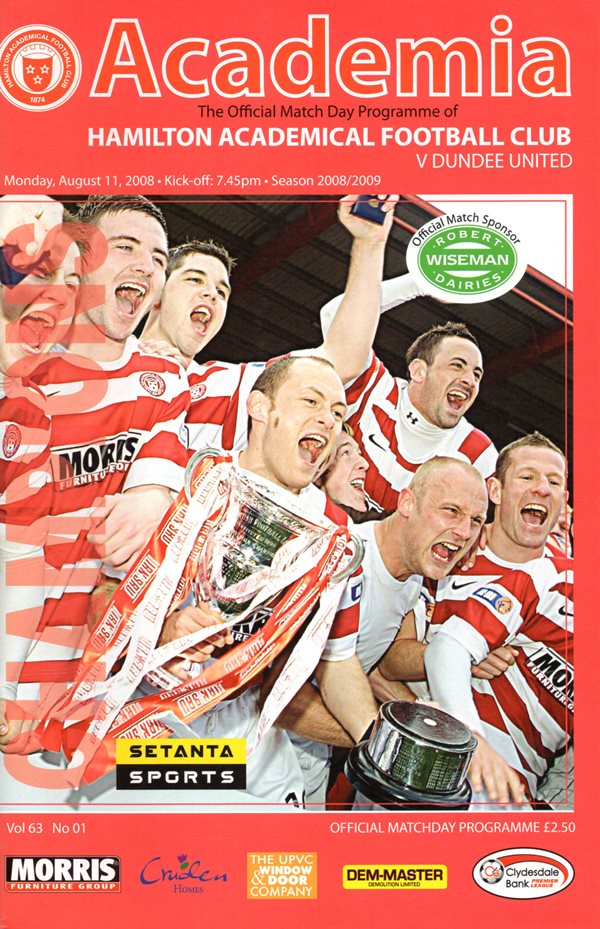 Despite United taking the lead through a Mark McLaughlin own goal, a Tony Stevenson free kick,and a controversial James McArthur handball, a great 20-yard strike from David Graham ensured Hamilton deservedly took all three points on their return to the big time.

Craig Levein handed United debuts to Scott Robertson, Warren Feeney and Roy O’Donovan, pairing the latter two up front as they lined up 4-4-2. Gomis, Flood, Robertson and Buaben made up the midfield, all with the freedom to get forward, while a more familiar back four consisted of Dillon, Wilkie, Dods and Grainger.

Hamilton were the first to threaten when David Graham found space on the right, cut inside and fired a shot at Zaluska which the ‘keeper did well to turn round his left-hand post.

United also started brightly and neat play let Morgaro Gomis send a teasing ball across the box but it was cleared. United were keen to get balls into the box to capitalise on the height of Feeney and O’Donovan and, on 10 minutes, a Grainger cross was flicked on by O’Donovan but Feeney was unable to stretch for it at the back post.

Hamilton continued to look lively and after 13 minutes Richard Offiong managed to dispossess Lee Wilkie at the touchline, cut inside and fire another shot at Zaluska which the Polish ‘keeper dealt with well.

United’s best chance in the opening stages fell to left-back Danny Grainger whose low deflected shot from the edge of the box was well held by Accies ‘keeper Thomas Cerny.

The referee was called into action for the first time after 21 minutes when Prince Buaben found himself in the book for a tackle from behind on McCarthy. From the free kick, Zaluska did well to save low to his right from a Swails header.

United took a fortuitous lead after 23 minutes. Willo Flood sent over a menacing cross from the left and, with Feeney lurking at the back post, McLaughlin attempted a clearing header which went straight into the centre of the goal, leaving Cerny stranded and the United fans directly behind the net jubilant.

The lead lasted just six minutes. Teenage sensation James McCarthy was breaking through the centre when Prince Buaben fouled him just outside the box. Stevenson stepped up to take the free kick and fired his shot through the wall and past a wrong-footed Zaluska.

United tried to hit straight back and were awarded a free kick in a similar position after Stevenson this time held back the marauding Buaben. After Stevenson was shown a yellow card, Feeney was unable to emulate the Accies player’s finish at the other end as his 20-yard effort flew well over.

Danny Grainger then saw his name taken for a late foul on McArthur directly in front of the Hamilton dugout.

After 39 minutes, Hamilton were ahead. Lee Wilkie was adjudged to have gone in late on McCarthy and Stevenson again took the ball for the set piece. This time he dinked the ball to the back post from where McLaughlin put his header back across goal for McArthur to bundle into the net, apparently with his hand. Despite appeals from the United defence, referee Stuart Dougal pointed to his chest and allowed the goal to stand.

Hamilton deserved a half-time lead. United created little in the way of clear-cut chances and Hamilton ‘keeper Cerny had little to do. The own goal was fortunate as the most dangerous players on the pitch were in red and white – McCarthy, McArthur, Graham and Offiong all causing problems for the United back four. The second Hamilton goal was controversial, coming from what looked like a clear handball, but in truth it was nothing more than Accies deserved.

Second half:
With United trailing 2-1 at half-time, Levein introduced Danny Swanson for the second 45, with the ex-Berwick Rangers man replacing Prince Buaben in central midfield. However, if United hoped the inadvertent soaking of the Accies cheerleaders at half-time would dampen the home side’s enthusiasm, they were to be disappointed.

Both teams knew the importance of the next goal and tempers began to run high after a physical challenge by Willo Flood on McCarthy left the 17-year-old on the ground and led to a minor scuffle in front of the home dugout. Flood was shown the yellow card and the match continued at a high tempo.

Next into the book was David Graham who the referee claimed dived after going down under a Wilkie challenge on the left wing.

It was Hamilton who got the crucial strike when they went two clear after 63 minutes and this time there was no doubt about the goal. McArthur played in striker Richard Offiong but he slipped on the greasy pitch as he wound up to shoot. As the ball sat invitingly 18 yards out, Graham was quickest to react as he drove the ball into the bottom right-hand corner of Zaluska’s goal.

Following a double substitution from Hamilton which saw Offiong and goalscorer Graham replaced by new signings Mark Corcoran and Lucas-Jordan Akins, Levein gave Francisco Sandaza his first taste of the SPL as he came on for O’Donovan.

However, most of the action remained in the United half and only a last-ditch sliding challenge from Sean Dillon denied Akins a clear shot from the penalty spot. Simon Mensing then found himself with space in the United box but his weak shot failed to trouble Zaluska.

United mounted a final challenge in the last 15 minutes and Sandaza came agonisingly close to his first United goal but his leaping header after 80 minutes was turned round the post by Cerny. Lee Wilkie also saw a header turned wide by Cerny from a testing Swanson cross. Swanson himself was beginning to get frustrated and this led to a yellow card after 79 minutes for a foul on the edge of the Hamilton area.

Time was running out and Wilkie joined Feeney and Sandaza up front as United pushed to get back into the game. Morgaro Gomis saw his 20-yard shot turned over by Cerny. From the resultant Swanson corner to the back post, Wilkie rose to knock the ball towards goal but Feeney’s flick was palmed over by the accomplished Cerny.

United’s final chance fell to Swanson but he couldn’t keep his half-volley down and it flew harmlessly over, summing up a disappointing evening for a new-look United that never looked comfortable and the healthy travelling support who made the Monday night trip to Hamilton.

Summary:
It was a new-look United side and one that never really settled in its first outing. The back four were playing quite deep against a very lively and physical Accies side. A lot of effort was put in in midfield but Feeney and O’Donovan suffered from a lack of decent service up front as they attempted to form a strike partnership. The normally solid defence at times looked hesitant and this was displayed at the third goal when United were unable to clear their lines and let Graham in too easily after Offiong had slipped. Sadanza looked good when he came on and tested Cerny but there was no way he could turn a match which Hamilton were determined to get three points from.