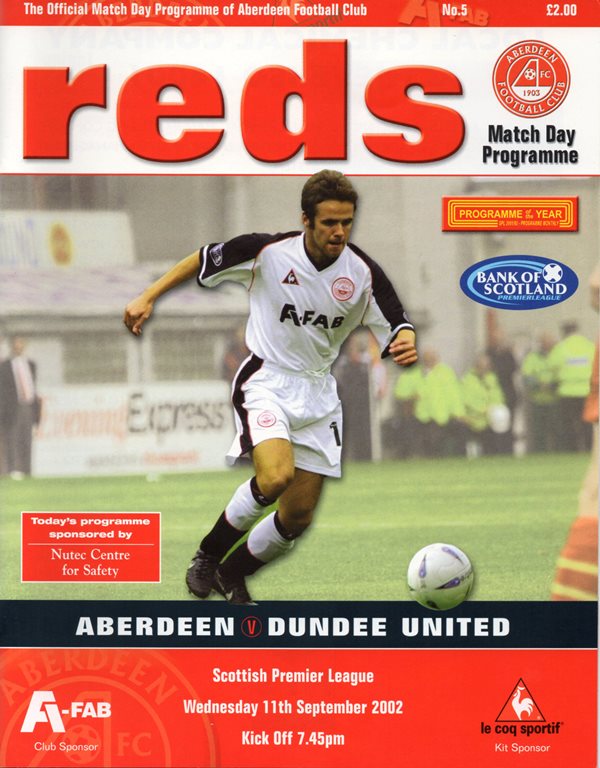 Alex Smith brought eighteen year old midfielder Mark Wilson into the starting eleven, along with Derek Lilley, to make two changes to the team who started the Dundee derby last week. Jim McIntyre and Arnar Gunnlaughsson dropped to the bench while Allan Smart misses out due to suspension following his dismissal against Dundee. In respect of those who died in New York during the 9/11 tragedy, both teams observed a minute's silence before kick off.

United suffered a nightmare start to the game by going a goal behind in the second minute. Kevin McNaughton fired in an early cross from the right and Darren Mackie nipped in between Paul Gallacher and Jim Lauchlan to head into the net from 8 yards. United hit back from the restart when Stuart Duff crossed for Steven Thompson, but the striker's header went wide of Peter Kjær's post. Kjær was forced to save from Thompson moments later following good build up play, leaving Russell Anderson to clear the loose ball. United's pressure paid off with seventeen minutes played. Third time lucky, Steven Thompson fired home from fifteen yards following a clever move that had seen Charlie Miller send Craig Easton on a run into the box, before the midfielder laid the ball back for the goal. Reeling from the equaliser, Aberdeen found themselves defending for the remainder of the half, and on forty minutes, United took the lead. Scoring his second of the match, Steven Thompson scored in spectacular fashion, reacting to a loose ball thirty yards from goal to take it on his chest and fire a left foot shot over Kjær and into the net.

United continued to press from the restart and on fifty minutes Thompson was unlucky not to net his hat-trick when he headed a Craig Easton cross over the bar. Aberdeen tried to fight their way back into the game though and on 53 minutes, Darren Young fired a shot wide, before a Patrizio Billio corner was headed well wide by Darren Mackie. Just before the hour mark, Charlie Miller shot wide for United, the elusive third goal still evading United. Aberdeen nearly found the equaliser two minutes later, but picking up a pass from Éric Deloumeaux, Darren Young could only shoot wide. The game is stopped for an extended period following a clash between Pittodrie team mates Kjær and Phil McGuire. On 75 minutes, a Mackie header is held by Gallacher as the home side upped the pace. With eight minutes left, a goalmouth scramble in the United box nearly resulted in a leveller for the Dons, however the danger was eased when Mackie fired an effort well over. From a Miller corner, Lauchlan headed wide for United and with a minute remaining, Jim Paterson beat McNaughton down the left to cross to Thompson, but the tall striker couldn't direct the header goalward for United and his own third of the evening. Alas, the points were already United's and five games into the season the Terrors were finally off the mark.