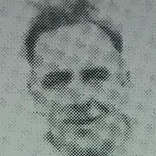 Cornelius had been with Folkestone and Grimsby Town before the outbreak of WW2. He joined United for season 1941-42 but he was not in the area long and left the Club when his army unit moved back to England. He was released in February 1942.