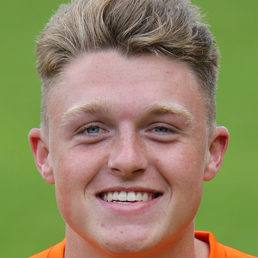 A product of the Dundee United youth academy, Harry followed in his brother John's footsteps when he signed on as a youth player at Tannadice at the age of 14, before agreeing his first professional form two years later. Harry's early development began with Celtic, where he progressed through their youth ranks from age 8 through to their Under 14 team - however he opted in 2012 for a move to United instead of Celtic's St Ninian's High School partnership.

Towering over his colleagues at 6' 7", Harry is believed to be the tallest player ever on United's books. Since signing professionally in 2014, he has remained a regular feature in the Club's Development Squad. In December 2015, Harry signed a new contract that will keep him at Tannadice until May 2018. At the end of the 2015-16 season, Harry was given his first team debut, starting in the 3-3 draw with Partick Thistle in May, and came off the bench to score his first goal for the Club in the final game of the season in the 4-2 win over Kilmarnock.

New manager Ray McKinnon had named him in the first team squad for the 2016-17 campaign, but a bid of £200,000 was accepted from Stoke City on 18 August and he moved on shortly after the season started.