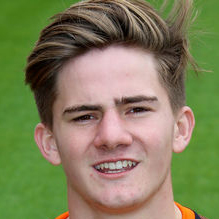 Hailing from Pittenweem, Scott has been at United since the age of nine and was part of the first group of players to attend the SFA performance school at St. John's High School in Dundee. He signed his first professional form with Club prior to the 2016-17 season.

Mostly involved with the United development squad, Scott made his debut in the Irn Bru Cup during the 2017-18 season at the age of 17.