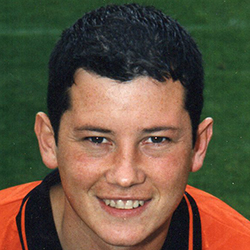 The son of former Hearts and United player Malcolm Robertson, Sandy came through the youth system at Rangers, making his first team debut in 1989 aged 18. A promising young player who was seen by many to be a future Scotland star, he ultimately failed to make the grade at Ibrox and was sold to Coventry City in January 1994.

After failing to break into the first team at Highfield Road, Sandy, along with Rangers and Coventry teammate Steven Pressley, arrived at Tannadice in July 1995 in a joint deal worth £1million - £250,000 of that towards the young midfielder. Making his first appearance in a friendly against Forfar Athletic, he made his competitive debut against Morton in the opening League game of the season.

Sandy was with United for two years but was rarely seen in the first team line-up, more often appearing for the reserves. He was transfer listed in January 1997 and released at the end of the season. he had spells with Airdrieonians, Inverness Caledonian Thistle, Livingston and Clydebank, as well as a duration in Australia with Morwell Falcons and Joondalup. In 2001 he returned to Scotland with Cowdenbeath and was later with Berwick Rangers and Raith Rovers.